On Sunday (May 3) a 20-strong field 20 real-world drivers, top DiRT Rally 2.0 players and special guests came together for a virtual race meeting, hosted by Codemasters, Motorsport Network, Gamebyte, Cooper Tyres and the FIA World Rallycross Championship presented by Monster Energy. This is the second such event following the success of the Catalunya Edition 2 weeks prior.

Just as with Catalunya, the format of the invitational mirrored that of a real-world FIA World Rallycross Championship event, with 4 Qualifying sessions and the top drivers progressing to Semi Finals, and an overall Final crowning the winner.

Rallycross is known for being a short, high intensity form of motorsport, where powerful cars race on tight circuits featuring tarmac, gravel and jumps. The Montalegre circuit, which in real-life is located on top of a Portuguese mountain range, has been faithfully recreated in DiRT Rally 2.0, providing an experience near indistinguishable from the real thing.

The Qualifiers were full of action, with real-world drivers mixing it up with the esports stars, and special guests proving their talent. Shane van Gisbergen was a notable stand-out from the new drivers, matching and in some cases beating the esports players, who are known to be the fastest rallycross drivers in DiRT Rally 2.0.

At the end of Q4 10 drivers had progressed to the Semi Finals, including both Hansen brothers, both Dall’olmo brothers, Codemasers’ rally driver Jon Armstrong, esports star Lukas Mateja, Catalunya winner Mattias Adielsson and more. The top 5 from the Semi Finals would then meet in the Final.

As expected, both Dall’olmo brothers, Killian the current rallycross world champion in the game, made it to the final. Alongside them were Armstrong, Shane van Gisbergen and Mattias Adielsson, resulting in a highly competitive grid for the Final.

The Final itself was full of action, featuring a jump-start for Killian Dall’olmo and crashes between van Gisbergen and Adielsson. All 5 competitors gave it their all and it was Killian Dall’olmo across the line in first, Quentin Dall’olmo in second and Armstrong in third.

Killian’s jump-start resulted in a 20 second post-race penalty which dropped him to fifth, meaning his brother Quentin took victory ahead of Armstrong and van Gisbergen on the podium. 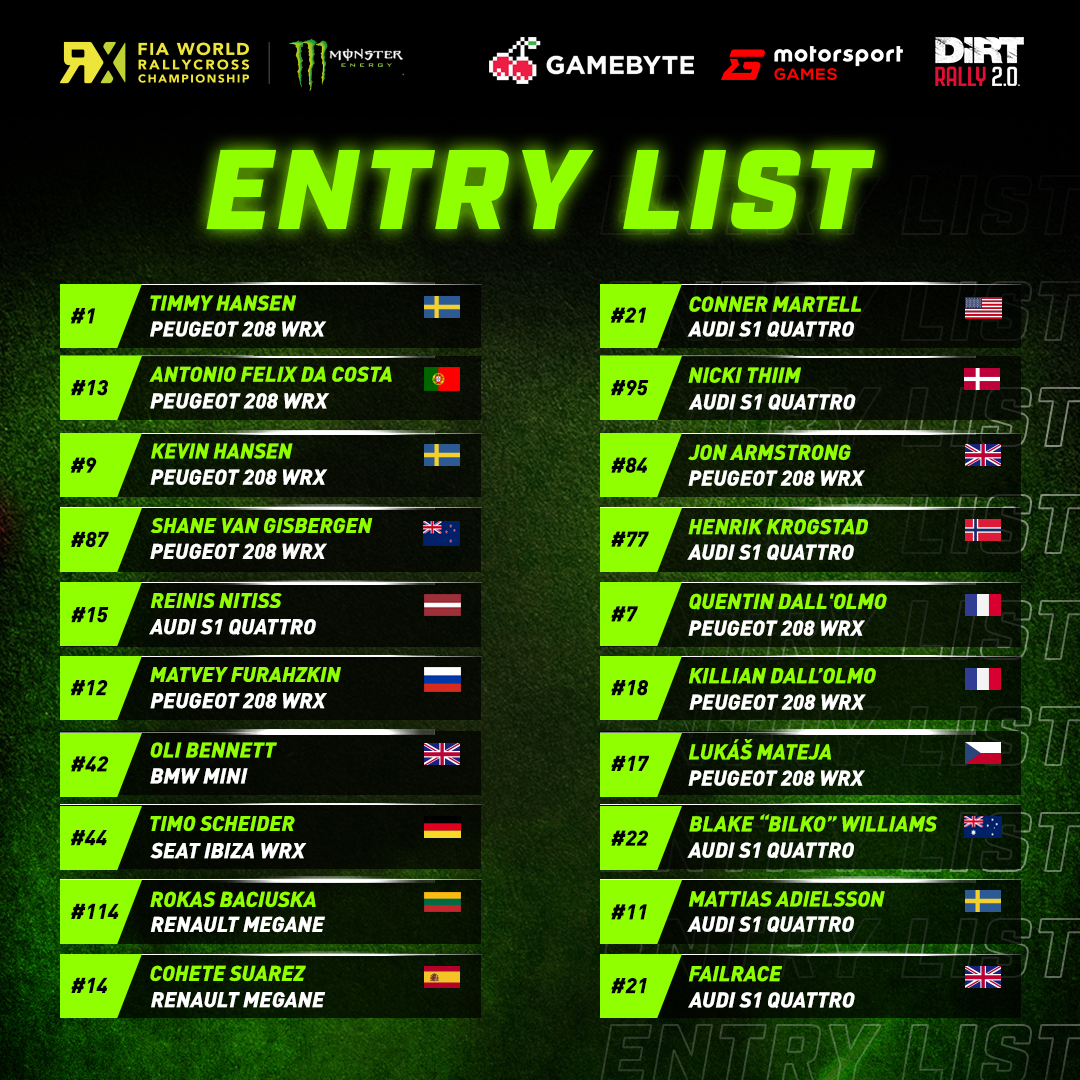